Jessica Chastain, Queen Latifah, and Juliette Binoche Are Helping Launch the Female-Driven Biz We Do It Together 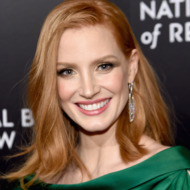 To combat female discrimination in the entertainment industry, Jessica Chastain and a slew of other decorated industry-ites have joined We Do It Together. The trades describe WDIT as a nonprofit production company aimed at financing films, docs, and TV series by and about women. Juliette Binoche, Freida Pinto, Queen Latifah, Ziyi Zhang, Phil Lord, and helmer Catherine Hardwicke, are among the many supporters also working with Chastain on its advisory board. “We hope in the future we won’t have a need for dedicated niche financing,” founder Chiara Tilesi explained in a statement. “Film has always possessed the power to defy convention and change hearts and minds, and this power and potential must be harnessed to challenge the current archaic norms related to women within the entertainment industry.”

The company’s formation comes on the heels of reports from the DGA and Center for the Study of Women in Television and Film that have underlined the employment disparities between men and women in TV and film. WDIT will get money from “grants, governments, corporate sponsors and individual donations,” according to Variety, and the company’s first movie will reportedly be announced in May at Cannes.